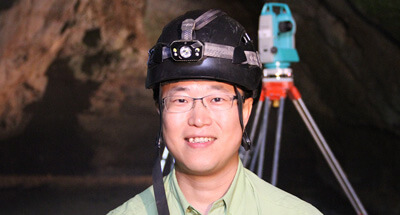 Regents’ Medal for Excellence in Research (2012)

I was born in Korea to Korean parents. However, from an early age, I had an atypical upbringing; one that drew me to eastern Asian paleoanthropology from early on. At about the age of one I was orphaned in Seoul, Korea and after living in an orphanage for six months, I was then adopted by an American family. Growing up in a Caucasian-American household and neighborhood always made me aware and interested in topics such as race and human variation. In order to discover my ethnic “roots” I traveled to Korea during my undergraduate days on an exchange program. My original objective in going to Korea was to reconstruct my own past, but I have since expanded these interests to eastern Asian prehistory, as one of paleoanthropology's goals is to reconstruct the past without all the pieces.

Since that initial trip to Korea I have been conducting paleoanthropological field and laboratory research in Japan and China as well. I have been carrying out collaborative research on a diversity of projects (e.g., hominin fossils, vertebrate taphonomy, lithics) in all three countries. From the accumulated experience, I believe that the best way to develop a firm understanding of the human evolutionary record in East Asia is to link the hominin morphological and behavioral records. This facilitates a more comprehensive perspective of the nature of Pleistocene hominin morphological and behavioral variation in Homo erectus and Homo sapiens (both archaic and modern). As such, my current research interests crosscut different disciplines in the social and natural sciences. To date, I have about 110 publications and $1.4M in extramural funding.